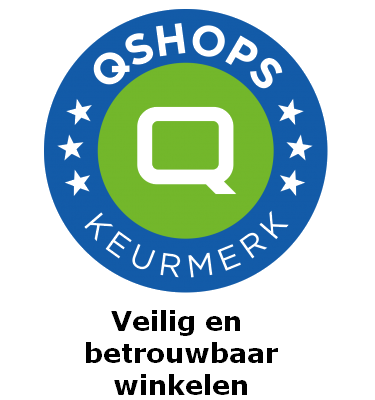 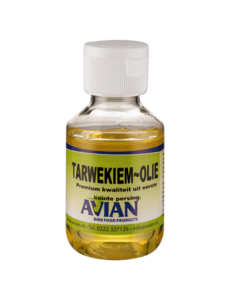 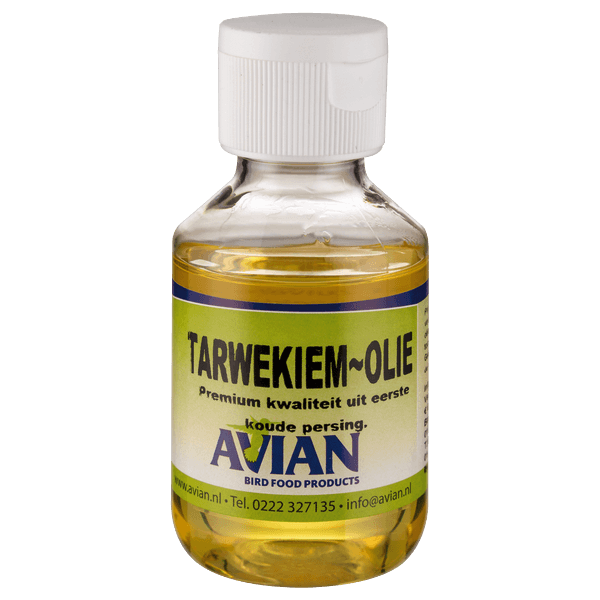 Read or write a review

Wheat germ oil is extracted from germinating wheat grains, which contain 13% oil. The oil contains many components that also occur in the human body and is therefore an excellent nutritional supplement, good for the blood circulation and nervous system. Read more

Information about the product:

There are a number of benefits of wheat germ oil. It is very useful for our birds. It fights aging, promotes health by improving blood circulation and it improves the immune- nervous system. Wheat germ oil is an unrefined oil that is obtained from the germ of the wheat kernel. It is the richest source of Vitamin E than any other vegetable oil. It also has a high content of Vitamin A and Vitamin D. It is rich in protein and lecithin. Other benefits of wheat germ oil include its antioxidant properties and its effect in strengthening the immune system and restoring overall health.

What is Wheat Germ Oil?
Obtained from the kernel of the wheat grain, wheat germ oil is a light yellow, fat soluble natural oil. As it is an unrefined oil, it has a thick consistency and a strong aroma. Although the germ of the wheat forms only 3% of the weight of the wheat grain, wheat germ benefits from the fact that it contains almost 25% of the total proteins, vitamins and minerals of the wheat grain. It is a very sensitive oil that tends to degrade if not stored with care. It should be kept away from high temperatures as if exposed to extreme temperatures, it may turn rancid. However, if kept properly, the shelf life of wheat germ oil can be extend up to a few months.

Benefits of Wheat Germ Oil.
Health benefits of wheat germ oil include improving the overall working of the heart. Research has shown beneficial effects of octacosanol and specifically policosanol in improving cardiovascular functions.
Octacosanol significantly strengthens the muscular and nervous system, increases optimal storage of glycogen in the muscles, promote muscle coordination, improve muscle growth and increase exercise tolerance, wheat germ oil decreases fatigue in the muscles and improves endurance, relieves muscle spasms, very important in racing pigeons.
Policosanol has been found to be effective in controlling production of cholesterol by the liver. It is believed to raise the level of 'good' cholesterol and reduce that of 'bad' cholesterol. Wheat germ oil is known for its antioxidant properties. Linoleic acid, oleic palmitic and stearic fatty acids are the essential fatty acids present in wheat germ oil. These essential oils cannot be manufactured by the body. Hence they should be taken externally as they improve the immune system, the nervous system and help in healthy cell growth and regeneration.

Avian Premium wheat germ oil is particularly high in a long chain saturated primary alcohol called octacosanol. This compound in particular was believed to increase endurance and muscle strength in sports persons. Wheat germ oil can be taken as a supplement in our birds diet.
The bird body consists of millions of cells. In each cell individually constantly very complicated metabolic processes play an important role, which are essential for maintaining good health and resistance of the bird body. The antioxidant vitamin E plays a role in preventing oxidation of polyunsaturated fatty acids and the breakdown of harmful substances (free radicals, eg by pollution), which damage cell structures

Premium Wheat Germ Oil as fertility stimulator.
The high content of vitamin E in Wheat germ oil got itself a reputation as a "fertility vitamin" early on. When it was being tested on laboratory animals, it gave every sign of deserving that reputation. When male animals were deprived of vitamin E, their testicles shrank. In pregnant female animals with vitamin E deficiency, the fetuses were reabsorbed into the uterus, preventing the animals from bearing young. Giving the animals even a single drop of vitamin E–rich wheat germ oil restored their fertility. In fact, vitamin E got its scientific name, tocopherol, from this particular ability. It means "to bring forth offspring." In numerous studies with wheat germ oil was found, that an improvement of reproductive capacity was found in our birds.

Avian Wheat Germ Oil Premium - to improve endurance, to accelerate recovery after physical exertion, in care of the heart muscle, with (continued) tired muscles, promoting the reaction and muscle coordination, protection of healthy cells and tissues in the nerves.